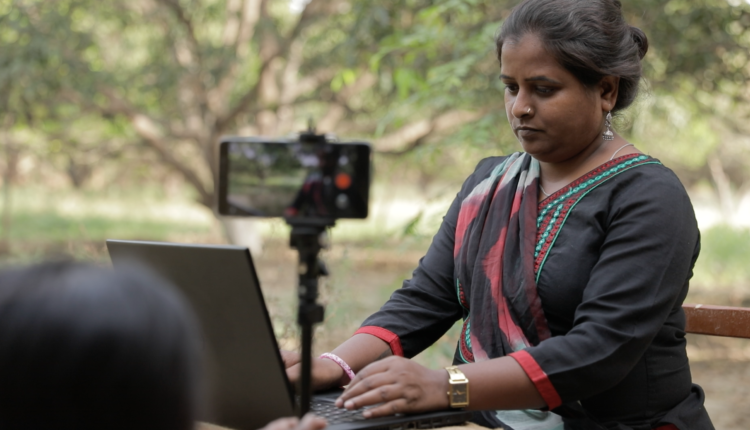 Kavita Bundelkhandi, the name behind the women’s only media organization Khabar Lahariya, has been in the field of Journalism from the year 2002. She started working with a small newsletter called Mahila Dakiya and eventually co-founded Khabar Lahariya with seven women with the support of an NGO called Nirantar. Being a Dalit woman and the editor in chief of digital media platform, Kavita’s journey has not been a cakewalk. Kavita has helped the women of Bundelkhand to rise up, empower and report the stories of their region. She talks about her organization and experiences to Kavya Kamal of Abhimukham.

How did the journey of Khabar Lahariya happen given the challenges in the rural areas? KL is said to have grounded and real journalism. How is that happening?

Khabar Lahariya’s origin happened with a very basic question: How could neo-literate women in UP’s Banda district sustain their literacy? Many women had enrolled for adult education courses and literacy camps as part of the government’s innovative Mahila Samakhya programme. But once the courses ended, given the paucity of material in their local languages, how would they continue reading and writing by themselves? Mahila Dakiya, a four-page broadsheet paper had its advent then.

That happened to be our cornerstone. What makes our journalism unique is its representation from the oppressed communities and pathbreaking reporting. We are known for the real journalism which is feminist in nature as well. We wanted to explore the rural stories and hence we spent many years reading and critiquing these stories, and then in 2002, we decided to do something about it.

That is when we launched a newspaper with hyperlocal content where we covered stories on corrupt officials and murders by ‘dabangs’  which were quite sensational. We received letters from the dabangs, threatening to file defamation cases against us and our reporters were told to not act ‘too smart’ for their caste. KL had arrived as a local, independent newspaper- beyond the influence of the administration and the local powerholders.

From Kavita Devi to Kavita Bundelkhandi, how has the journey been?

My parents at a very young age gave me a name which they thought was connected to something godly. We can see surnames representing the name of gods and goddesses in our village. However, I started to realise that the meaning of my surname was not well received by the society and that’s when people started to dig into my caste.

Being from an oppressed community and establishing a media platform on your own, how challenging has it been to you? Do you feel that Indian society still functions with the ideals of Brahmanism? What had been the thoughts behind Khabar Lahariya?

Well, I think that in todays’ time, a lot of divisive politics is happening. It has been very challenging for me to reach this place today as I chose to speak up. It definitely becomes even more tougher for a person who doesn’t raise the voice about the oppression. When it comes to Brahmanism and Hindutva policies, which are quite rampant at this time, divisions are seen there as well. Even the multiple Dalit organisations and the powerful ones like Bhim Army are not able to incorporate every oppressed community under one umbrella.

I feel that it is further going to fragment the society as there are a lot of people who do not believe in that. I believe that our caste (jathi) isn’t written in our destiny or birth. We make it by ourselves by living our lives. However, I feel that people are running behind labelling and identifying themselves to a sect, caste or religion. It is the change that I have been observing off lately in the society that I live and come from.

Coming back to Khabar Lahariya, we do not associate it to a Bahujan or Dalit media organization, rather, it is a feminist media house which brings together the stories of grassroot strata.  We have journalists who are women from Dalit, Adivasi and Muslim communities and these are the voices we usually do not hear in the mainstream media.

What is empowerment to you?

For me, empowerment means to have the choice of making decisions. In my organization, I do have that right and even at my home. Once you are educated and economically independent, you have the right over you and that is empowerment for me. I can eat, think, read, write and post whatever I want. That gradually gives you self-confidence and it gives me the idea of empowerment. Nobody knows me by my father’s or husband’s name but by my work. That also empowers me.

Khabar Lahariya started off from a village of Bundelkhand and stands tall on a lot of ethics and principles. How far has the organization been able to adhere to what it truly believes in?

When we started, our aim was to publish and print newspapers so that the women of our villages would become aware and informed. Also, they did not have any other form of media except newspapers, which is why, our dreams were limited to what we had around.

We were able to fulfill our goals towards turning a monthly newspaper to a weekly one. Everything started within one village which gradually expanded to other villages and districts. We never had any plan to become a digital platform, however things started to change when smart phones became quite normal and data became cheap. Our newspapers weren’t keeping up with the fast-paced life.

In 2015 Khabar Lahariya became a complete digital platform that way. We trained our journalists and provided them with smartphones using which they telecasted their stories. Slowly we started our channels on YouTube and social media platform. Our journey was full of ups and downs economically, as we were entirely dependent on the grants provided by NGO’s and the like. That is when we collaborated with Chambal media. Hence, wherever we are, it is a matter of pride and satisfaction.

It is often said and seen that the press freedom in India has been declining. Even powerful media houses have not been able to escape the crackdowns.. Has Khabar Lahariya managed to stay away from it or has there been an impact on the overall functioning of the press?

I feel that the crisis and the challenges that we face today is for everybody who is there in the media house. Be it you or me, it is the same. The government definitely doesn’t want the media houses to be a watchdog and pose questions to which we do not conform with. We have a very neutral approach and possibly it could attack the government’s image. There are many media channels that have been shut down and threatened because of the same reasons. The News Click’s example being the latest. Therefore, the challenge is real. However, we do not try to cover stories of one particular sect and ignore others. Every other rural sector is our concern but I don’t see this happening with other media houses. They usually tend to go behind a person or an ideology, hence ignoring all other factors. This is how I personally see it.

What is your message to the big media houses that often fall prey to the agendas and political parties?

Sometimes I really don’t understand the way mainstream media works. If somebody only speaks and telecasts praiseworthy stories on government, it ceases to be a media channel. If a channel doesn’t speak about rural issues, fundamental rights, and conceals the truth, it hardly seems to be a media house to me. That is where I get confused. Even in the newspapers, we get to see columns of advertisements by the government, claiming the work they did. Sadly, somebody from the villages would understand and realise the false campaigning.

How can big media houses take such advertisements without even fact checking the reality? Why are they not held accountable too? It is clear as crystal that everything is for economic gains.  When I connect these things, I feel that the idea of media and journalism is degrading in existence. Because of this, the threats come on small scale media houses that essentially try to stay connected with the roots. Televisions also simply spit venom in the name of religion and politics. These tactics however could be understood by the common people of India.

Will Khabar Lehariya expand itself in the coming years to other states and districts? What are the plans?

Yes, there are definitely chances of that. We are currently covering stories from fifteen to twenty districts of Bundelkhand region. Our plan is to expand ourselves to fifteen more districts. We are going to start in Bihar as well. Currently we are busy in building training courses for young girls from the villages through Chambal Academy. So, currently that is in the pipeline !

Modi Government has a deal with corporates: say protesters

“I am concerned about my studies; I really wish…