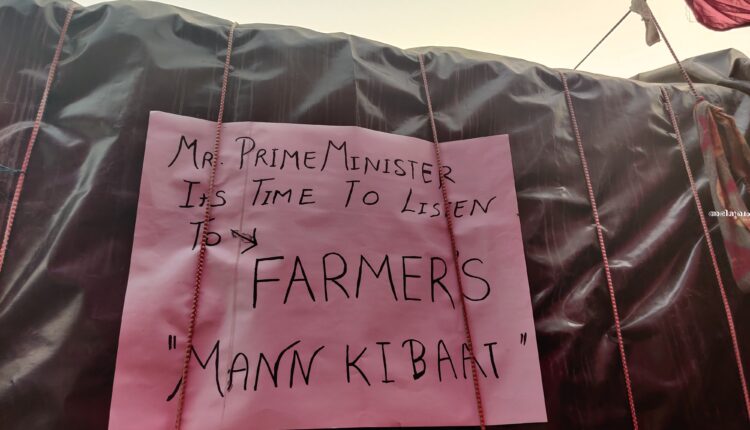 Modi Government has a deal with corporates: say protesters

Winter in Delhi is bone-chilling. And it has been 22 days since thousands of farmers are protesting on the borders – braving all the odds. They want the “anti-farmer” bills repealed, and are resolute and unremitted. Nothing seems to stop them.

In the last 22 days, the protesting farmers have lost about 15 of their fellow men in the battle. Most of them succumbed embattling the harsh weather and tough conditions. The number is likely to increase with the government lingering the issue. But these losses have only strengthened the farmers and made them tougher.

The support for the farmers is pouring in from all corners of the nation. And countless are joining the fight against the Centre’s laws. Swathes of protesters have been blocked at the borders by security forces preventing them from entering Delhi. The farmers have transformed the borders into the epicentre of the protests. Hundreds of farmers have gathered and stationed at Singhu and Tikri borders of Delhi. The numbers are swelling daily.

We are farmers, not terrorists

‘We are farmers, not terrorists’, read the banners and hoardings raised by the farmers protesting at the Singhu border. The borders of the national capital have been occupied by the farmers, particularly those from Punjab.

Though the government has installed barbed-wire fences and deployed heavy security forces, nothing seems to deter the protesters. They are united on their stand against the farm laws passed by the government.

The Indian Farm Reforms Bill (2020) was passed on 27th September, which on paper would help farmers to have multiple marketing channels and contract farming.

Children are a formidable force

The farmers’ protest has seen incredible participation of youth and even school-going children. Veer Pratap Singh, a student of eighth class, has left his school for the time being to take part in the protest.

“I have come from Anandpur Sahib with my family. This agitation is to save our land as it is our only source of income. That is why I am here. I have left my education to support my family today, but will rejoin school as soon as things are solved,” said the young boy who wants to be an IAS officer when he grows up.

Government has a deal with corporates

Citing the fear of the entry of corporates in the farming sector, the farmers say, they will be forced to sell the produce at half the rates, in the absence of government or legal aid.

“No governments are supporting us here. We understand the law entirely. The deal has already been made between the government and the corporates. Now they are planning to remove MSP, which was loosely applicable earlier. Instead of strengthening it, the government has planned the opposite.

“The opinions or any representation from our side was not taken into consideration while making the reform bills. Forget the central government, even our state governments have not pitched in to help us,” said Harsimar Singh, a protester.

“The rate of Maize produce in Punjab is currently Rs. 1,870. However, the purchase has been done by the private players for Rs 600-700 in the Napah and Rajpurah Mandi. The produce has further been reached at the retail corporate market for half the amount. We have proofs for the same,’ said Rajbeer Singh, another farmer from Rajpur.

“If the contract keeps on growing among the big corporates, the mandis would come to an end in the coming years. Common people will not be getting the produce at reasonable rates, and we will be left in the lurch, producing the crops instructed by these private companies,” he added.

The existence of APMC is threatened

Vinod Godara, a farmer from Haryana, says the new farm laws are anti-farmer. “If mandis are not there, our crops will not be sold, and farmers of our village will have to live with immense loss,” he said.

“The government had promised us a lot. However, the promises have not been kept. Our Chief Minister’s have also been lying to us. Until and unless we get a reliable source of affirmation on repealing the laws, the protest shall continue,” Godara added.

We are one and united

The farmers are in the struggle as a united force. “We are confident that the government will have to concede to our demands. They cannot turn a blind eye towards a formidable united force. More people are joining the protest daily. Our struggle is gaining support all across the country. We will stand together until our demands are met,” said Sarabjeet Singh, a farmer from Punjab.

There is no left, right, or centre here

This struggle is led by the farmers of the country, says Harmanth Singh, an AIKS leader and farmer from Hoshiyarpur. “We are fighting against the laws of the government under the banner of farmers. This is a united movement for farmers and labourers. There is no left, right, or centre here today. We have to save the farmers and agriculture. This is our goal. However, you will not see people from BJP or Congress leading the protest. The Left you see here is fighting for the farmers, the common people and not for its benefits,” he said.

Fundamentalism is a path to destruction

While the farmers’ movement is gaining steam, the supporters of the government are putting up efforts to degrade the cause for the struggle. One of the major accusations is that the protesting farmers’ are Khalistanis. However, the farmers are very clear on this. They say we are not the proposers of Khalistan. “Our opponents have always tried to target our protests in the name of Khalistan-separatist movement. We do not want Khalistan. Whichever country has been made in the name of religion has taken the path to self-destruction. So is the whole idea of Hindu Rashtra and Khalistan. Secularism is the only way of development,” said Rakhbir Singh.

“I am concerned about my studies; I really wish…